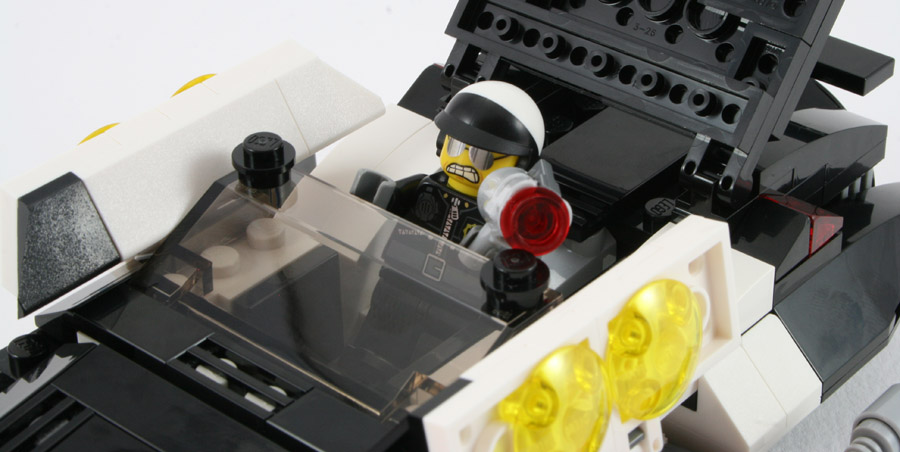 This set at first looked a little dull and boring to me, but I don't think the photos on the box do it justice. It contains an odd looking railway platform, an awesome looking cop car, a couple of minifigs and a couple of crocodiles. Not exactly the sort of things you tend to see together!

The bags are numbered 1 to 3, with #1 creating the railway platform and the minifigs/crocs; #2 creates the base of the cop car; and #3 adds the top. Similarly with other recent sets, I don't know what the point of separating #2 and #3 are. #3 ends up being quite small. There are 313 parts in this set. There are a couple of new parts that make up the gun used by the cop (which also seems to be making an appearance in the new 2014 Star Wars sets). This gun has a little push down part that causes a 1x1 round plate to pop out the front. There are also some parts that appear in new colours. The 2x14 plate in Tan and the Crocodile in Dark Green.

This is the only set with two minifigs, the rest of the LEGO Movie sets have at least three. I guess the two crocodiles make up for this.

We have another Emmet, identical to the others so far. And the Good Cop/Bad Cop, who has two faces as seen in the movie trailer. He also carries a nice compact gun that shoots a 1x1 round plate. It can shoot a decent distance, but is a bit fiddly to reload.

The two crocodiles aren't exactly minifigs, but they are pretty cool. I'm not sure how they managed to recruit them as cops, or perhaps they are supposed to be robotic like most of the other bad guys seem to be. Come to think of it, the Good Cop/Bad Cop seems to be the first non-robotic bad guy I've come across in these sets so far. Unless you count the ability to twist your head 180 degrees as robotic. After putting the minifigs together, the first part is the railway platform. It looked pretty boring to me, and the build wasn't anything special. I build most of these sets with my son and when we completed this railway section, I was keen to move on. However, he just wanted to stop and play with it for a while. There is a little push/pull switch that makes the platform drop and any unsuspecting minifig that happens to be standing on it might fall into the mouth of a waiting crocodile! Also, we had to try out the gun and probably spent more time trying to find the fired projectile than anything else. Next up is the cop car. To me, this was the highlight of this set. A fairly interesting build process, with some nicely attached sections. The end result is a very sleek, futuristic looking car. The side mounted fold out rockets/guns are awesome, although a little delicate. The roof can lift up on the back hinges and a minifigure can fit inside. In the end, this is a highly playable set. I think the highlight is the awesome looking cop car, although how it's meant to be related to a couple of cop-crocs and an old railway platform beats me. We will just have to wait for the movie I guess.

The following video can be found on the LEGO product page for this set:

Check out the rest of the photos taken during this review at my Bricksafe page.

This set is now available for sale via Amazon, eBay, LEGO Shop, or check the country specific links on the set's details page. Note that Rebrickable earns a small commission on any purchases made via these links, and we appreciate it when you do :) 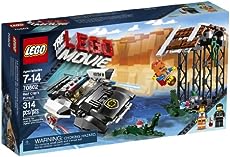 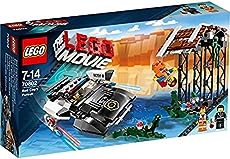